Ovida has launched the first site of its $2.3million Community Energy Hubs project – a 52-resident community housing apartment building in the Melbourne suburb of Preston, with a solar and battery storage system.

The Australian-first microgrid project will allow all the building residents to have access to solar energy.

Ovida Executive General Manager, Chris Judd, said, “This initiative uses smart technology to bring renewable energy to people who were not able to access it in the past such as renters and low income earners.

“It will drive down their electricity bills by providing solar power that is cheaper than their grid electricity costs.”

Mr Judd said Ovida installs, operates and maintains the solar panels, batteries and energy distribution technology free of charge, meaning residents and tenants have the opportunity to opt-in to the initiative. 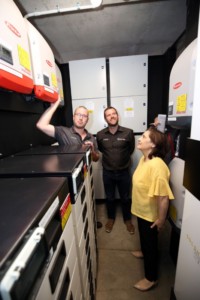 “This is an exciting milestone as it is the first time this microgrid technology has been used to allow one solar and battery installation on an apartment building to be shared with all apartments,” Mr Judd said.

SolSahre, the technology used in the installation, is designed by Melbourne-based company Allume Energy.

This apartment building is the first of several sites for the Community Energy Hubs project with more sites expected to be installed across Melbourne in 2020.