After Stage One of the Kidston Solar Project began generating its first revenue in November 2017, Genex is now focusing on Stage Two which will see 270MW of solar power integrated with the Kidston Pumped Storage Hydro Project. With the project including around three million PV panels, it will become the first integrated solar pumped hydro project in the world.

The project is located in north Queensland on the site of the historical Kidston Gold Mine and is valued at close to $1 billion.

Upon completion, the project will generate up to 783GWh of renewable energy each year and will have a total of more than 3.5 million solar panels.

The pumped storage hydro project will utilise two of the mining pits from the abandoned gold mine, which will make up the upper and lower reservoir, powered by the integrated solar farm.

During peak power demand periods, water will be released from the upper to the lower reservoir and will pass through reversible turbines.

During off peak periods, the water will be pumped back from the lower reservoir to the upper reservoir using electricity primarily generated from the 270MW solar farm.

The innovation of the project extends even further, with the integration of large-scale solar providing a world-first example of generating, storing and dispatching renewable energy on demand during peak periods.

The Kidston site is situated in one of the highest solar radiation zones in Australia and is utilising the abandoned gold mine for the pumped hydro system which has allowed for a significant reduction in construction costs and time.

The project benefits from extensive existing on-site infrastructure and materials, mitigating the need for significant capital expenditure which is normally associated with the building of a large-scale pumped storage hydroelectric generation scheme.

Genex also owns the pipeline linking the nearby Copperfield Dam to the project site which enables access to 4,650ML of water annually which can be used for supplementing the Kidston scheme in a prolonged drought, contributing to the ideal location for the project. One of the biggest challenges that Genex has faced in the development of the project is being able to secure enough capital.

Given the close to $1 billion in capital cost and the size of the company, raising sufficient funds has been the main challenge for Stage Two.

However, Genex aims to replicate the successful funding arrangements for the Stage One Solar Project by using a long-term offtake agreement to underpin the project financing, and using the strong government support for the project to facilitate potential concessional debt funding.

In support of renewable energy projects, the Australian Renewable Energy Agency (ARENA) provided $8.9 million in funding to support the construction of Stage One, and has recently awarded additional Federal Government funding of up to $5 million to assist the financial close process of Stage Two.

ARENA CEO, Ivor Frischknecht, said Stage Two of the Kidston hydro and solar project is an important step in achieving a secure and reliable grid, and increasing the value delivered by renewable energy.

“Kidston will be the only grid connected solar project located in Australia’s solar red zone, providing consistent strong sun throughout the year, and combining it with pumped hydro will provide Queensland access to an entirely renewable flexible energy option,” Mr Frischknecht said.

The Queensland State Government has continued to support the Kidston Renewable Energy Hub, designating it as ‘Critical Infrastructure’ to the state which allows Queensland’s independent Coordinator-General to fast-track approvals and development timelines.

Unlike other forms of renewable energy, the integration of large-scale hydro storage with solar will allow the project to provide dispatchable, reliable renewable energy at peak demand.

By integrating the 270MW Stage Two solar project, Genex is able to store significant amounts of solar energy during the day and release it during the morning and evening peak periods through the hydro system for up to eight hours.

The pumped hydro energy storage capacity was initially estimated at 1,500MWh, but a study conducted with global engineering firm Mott MacDonald, found that with optimal use of the site’s existing infrastructure and design of its turbine technology it could provide up to 2000MWh of energy. 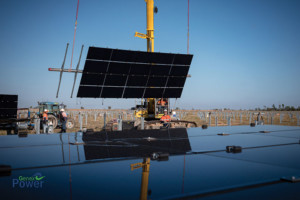 Electricity generation will be ramped-up until full capacity has been reached, at which point the 20-year Revenue Support Deed with the Queensland State Government will be initiated.

“This ground-breaking milestone marks the first earnings for the project and for Genex as a company. This transition from a development company to generating operational cash flows will serve to strengthen our financial position as we seek to reach financial close for our Kidston Stage Two projects in 2018.”