A note from Energy magazine’s Editor:

At the time of publishing the June issue of Energy magazine, the result of AGL’s proposed demerger was set to be determined by a shareholder vote on 15 June. However, AGL has since announced its decision to ditch its demerger plans, resulting in major executive leadership changes and a review of the company’s strategic direction. The following article has been edited to reflect these significant changes and therefore will differ from the version that you see published in the print magazine. Energy magazine is dedicated to bringing you the latest news as it unfolds, and you can read all the latest AGL announcements via our AGL demerger hub. It’s the topic that has dominated talk in energy circles this year – the AGL demerger. In May, Energy sat down with Christine Corbett, who was set to become the Managing Director and CEO of a demerged AGL Australia, to discuss the demerger, her vision for AGL’s future, and her perspective on critical challenges in the broader energy industry. With the demerger now canned, we caught up with Christine again to discuss AGL’s revised plans as it moves forward as a unified, single business.

On 30 May, AGL Energy withdrew its proposal to demerge into two businesses, resulting in the resignations of AGL Chairman, Peter Botten, and CEO, Graeme Hunt.

AGL Energy deemed that the Demerger Proposal would not receive the necessary 75 per cent stakeholder approval at the scheduled 15 June vote to gain approval, despite the Board maintaining that it would be in the best interest of its shareholders.

It is believed that the 2022 Federal Election result also put more pressure on the Board of AGL, and contributed to the belief that the vote would not end in its favour.

Mr Botten said, “While the Board believed the demerger proposal offered the best way forward for AGL Energy and its shareholders, we have made the decision to withdraw it.”

AGL’s demerger was designed to create two industry-leading companies, each with strategies tailored to their individual purposes. Accel Energy was designed to be Australia’s largest electricity generator, providing low-cost energy and driving the energy transition by repurposing its sites into low emissions energy hubs.

AGL Australia meanwhile was designed to be a leading multi-service energy retailer in Australia, supported by a sophisticated market trading function with access to firming, storage and renewable assets to help manage its energy portfolio risk.

The proposed demerger would have seen Christine Corbett, AGL Energy’s Chief Customer Officer, move into the role of Managing Director and CEO of AGL Australia.

Resistance to the demerger: how it played out

Earlier this year, the demerger plans were thrown into the spotlight when AGL Energy received two unsolicited takeover bids from Brookfield consortium and billionaire Mike Cannon-Brookes, which would see the pair acquire 100 per cent of AGL’s shares and close its coal-fired power stations early.

The AGL Energy Board stated that both proposals materially undervalued the company on a change of control basis and were not in the best interests of AGL Energy shareholders.

Mr Cannon-Brookes then changed tack and came for AGL again in May, this time acquiring an 11.28 per cent stake in AGL shares through his family’s private investment group, Grok Ventures, making him the company’s largest shareholder.

Concerns were then raised by a number of proxy advisers because his holding was gained through a series of swaps and derivatives, meaning partially borrowed stock can be recalled with three days’ notice – the implication being that he does not have the same exposure to share price changes as other shareholders.

Mr Cannon-Brookes made it clear in a letter sent to AGL’s board of directors that he intended to block the scheduled 15 June vote on the company’s demerger, which required 75 per cent approval to go ahead. Mr Cannon-Brookes claimed the demerger would lead to two weaker entities, which he claimed would be more costly to run and delay the transition to net-zero.

Instead, Mr Cannon-Brookes stated that by remaining one entity, AGL could begin shutting down its coal power generators and take itself out of coal power by 2030, in order to speed up the transition to renewables.

AGL Energy said it had invited Mr Cannon-Brookes to share his plan for how this could be achieved without negatively impacting shareholder value, customer prices and reliability but said Mr Cannon-Brookes provided no such a plan.

AGL Energy said, in contrast, it had spent more than 12 months working on its plan for the demerger and how both AGL Australia and Accel Energy would support Australia’s energy transition.

Responding to the ditched demerger announcement, Mr Cannon-Brookes tweeted that it was “a huge day for Australia”.

AGL: committed to demerger until the end

Despite Mr Cannon-Brookes’ campaign against it, AGL Energy remained committed to the demerger proposal, doubling-down on its outlook upon releasing its Demerger Scheme Booklet.

In early-May, Ms Corbett said, “The unanimous view of the Board is that the demerger is the best way to create shareholder value by allowing flexibility and a more focused strategic direction for each company moving forward, and providing clear pathways to low-carbon futures and tailored financial structures aligned to the profiles of each business.

“We have a clear plan that will deliver the best outcome for our company, our shareholders and for Australia’s responsible transition.

“This plan is backed by real investment and a pipeline of real projects to lead the transition, including a commitment to underwrite 3GW of renewables and flexible energy generation capacity by 2030, and a defined pipeline of 2.7GW of wind, battery, pumped hydro and low-carbon firming projects.

“The Demerger Scheme Booklet gives our shareholders a clear and detailed plan for how we will accelerate Australia’s decarbonisation in a way that wouldn’t otherwise be possible.

“The key part about the Demerger Scheme Booklet is that the Independent Expert has recommended that it is in the best interest of shareholders for the demerger to go ahead.”

In the Demerger Scheme Booklet, the AGL Energy Board summarised that the demerger would provide four key advantages to its shareholders: unlocking value through the two separate entities and dividend policies; creating two industry-leading companies, within which shareholders can invest based on their value preferences; providing tailored purpose in individual strategies and initiatives; and enabling the future of energy through the responsible acceleration of decarbonisation.

On the flip side, the disadvantages associated with the demerger included the one-off implementation costs of approximately $260 million, the additional ongoing operating expenses of running two separate entities, and the loss of scale and diversification.

The AGL Energy Board maintained that the advantages of the demerger outweighed the disadvantages.

“The Board considers that the potential for these additional costs can be offset by operating cost savings that AGL Australia and Accel Energy will have the potential to realise following the demerger, including technology cost reductions and reduced overheads driven by a more focused organisational structure,” Ms Corbett said following the Scheme Booklet release.

The Demerger Scheme Booklet also outlined the alternatives that were considered by the AGL Energy Board, which included maintaining the current business structure; accelerating coal-fired asset closure whilst maintaining the current business structure; an internal separation within AGL Energy; a partial or whole strategic sale to another buyer; or an Initial Public Offering (IPO).

The AGL Energy Board said at the time that, after considering these alternatives, it found that the demerger was “more likely to enhance value for AGL Energy Shareholders over the long term”, which was supported by the Independent Expert Grant Samuel. AGL Energy said that the transformation of its business would enable decisive action to better address its climate-related risks whilst taking the lead in supporting Australia’s energy transition, creating long-term value and sustainable investment opportunities at the same time. 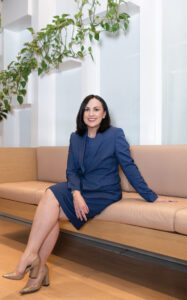 What’s next for AGL?

As it stands, the future for the unified AGL Energy remains uncertain, with a strategic review of the business now underway by a Board sub-committee co-chaired by Vanessa Sullivan and Graham Cockroft.

One thing that is clear is that the energy customer profile is changing; as are the expectations Australians have when it comes to action on climate change.

As the retailer-customer dynamic changes, AGL will have to accommodate for the shift and ensure that it is still adding value.

For Ms Corbett, the solution lies in engagement – a strategy that she has seen play out in a similar way at Australia Post, as the organisation moved from a “letters business” into a parcels eCommerce company.

“I look at energy and it’s really similar. You’ve gone from sort of a traditional utility, which is fairly ubiquitous, to all of a sudden understanding now you’re a customer-centric organisation.”

With this engagement comes the opportunity for energy customers to really “lean in” and understand their own energy behaviour and usage.

Coal exit still up for debate

In terms of timelines for how quickly AGL Energy exits from coal, the demerger had proposed for Accel Energy to release closure “windows”, which would give the business the opportunity to bring forward the closure of coal-fired power stations if the system was ready and the market conditions were right.

At the time, AGL Energy said these windows would also allow for policy changes, such as the previous Liberal Federal Government’s request to extend the generator closure notice period that energy companies should be required to give from 3.5 years to a minimum of five years.

“We have already brought forward our coal closure dates, and we’ll be reviewing this every year should the system demonstrate it is ready even earlier for coal generation to close,” Ms Corbett said.

“If we can move faster in a responsible way, then we will. We have already closed the first unit at our Liddell Power Station, and we are on track for its full closure in less than a year’s time. Our work to transform the site into the Hunter Energy Hub is well advanced.

“We have said before that the transition needs to be managed in a responsible way – any other approach would have serious implications for electricity prices, grid stability and jobs.”

AGL and Grok: working together?

Grok Ventures said it “welcomed the sensible decision by AGL to abandon its value destructive demerger plan and renew its Board”.

“AGL’s retail and institutional shareholders have sent an emphatic message to the Board and management of AGL that the company needs to be kept together to take advantage of the economic opportunity presented by decarbonisation,” a Grok Ventures spokesperson said.

“As AGL’s largest shareholder, we have requested a meeting with Vanessa Sullivan and Graham Cockroft who are co-chairing the strategic review.

“Grok has strong views about the future direction of the company – including a Paris-aligned plan, taking advantage of the electrification transition and the renewable generation opportunity.

“We will be seeking assurance from the co-chairs that the strategic review is not code for selling off AGL’s assets piece by piece.

“Our position is steadfast that AGL needs to be kept together as an integrated company. We believe that is in the best interests of shareholders, customers, Australian taxpayers and the planet.

“Grok will be seeking Board representation. We want to ensure that AGL has the talent, capital, capability and oversight that is required to embrace the opportunity presented by decarbonisation.”