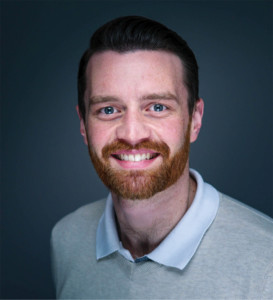 As Australia’s energy network continues to evolve in response to the addition of large-scale renewables, it’s critical that we have the right policy settings in place to incentivise the development of more virtual power plants, which will play a critical role in Australia’s future, distributed energy network.

The industrial revolution fundamentally changed the way people interacted with energy and had a profound impact upon our lives.

The centralised generation and distribution model of electricity that was born of this revolution has persisted for the better part of a century: very large, spinning machines, burn a combustible fuel to produce electricity, which is then pushed down long conductors to reach your house.

Technology, however, has changed. Generators have evolved to be fired on alternative fuels, machines have been developed that burn no fuel whatsoever but generate electricity from the movement of the wind, or the radiation of the sun.

Devices have been introduced that can store that energy for use later. This wave of new technology has potentially delivered us to the precipice of another energy transformation.

The introduction of this new model paves the way for a new type of generation asset, the Virtual Power Plant (VPP).

A VPP is an interconnected ecosystem of residential generators acting in unison to balance the grid and reduce vulnerabilities, and the smart gateway is the device which makes it possible.

It is responsible for monitoring, control and aggregation of consumer owned generators to deliver a coordinated service to the grid.

Australia is uniquely positioned globally with regard to smart gateway innovation, and has been the pioneer in the introduction of the VPP, with global leaders in VPP technology being Australian founded companies.

Reposit for instance just last year won the coveted Sir William Hudson Award for their VPP technology, the highest honour possible in the field of engineering.

On face value this may not seem all that profound; however, Energy Networks Australia (ENA) predict that by 2050 between 30-45 per cent of Australia’s entire electricity needs will come from customer owned generators.

The VPP can behave much like a large-scale generator and in many cases, is superior. There are however, some key differences with the VPP:

But technological improvements are not the only force at play. In the last decade, electricity bills for the average Australian have nearly doubled, increasing by 80-90 per cent in real terms.

During that same period, the electricity consumed per household has grown annually by only 0.7 per cent4. 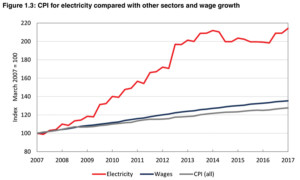 Figure 1. CPI for electricity compared with other sectors and wage growth (Australian Competition and Consumer Commission, 2017).

In September 2017, the Australia Competition and Consumer Commission released its Retail Electricity Pricing Inquiry Preliminary Report5, which found that:

This has placed an immense burden upon electricity consumers, and despite ready access to the service, has driven many into ‘energy poverty’.

Unfortunately, those consumers who are in positions of vulnerability are the ones who are hit the hardest by issues in electricity affordability.

Increases in social inequity and the numbers of consumers pushed into financial hardship is just one of the reasons why today the electricity sector is the single most distrusted in Australia behind banking and insurance6.

The rising price of electricity combined with a lack of confidence in industry has resulted in consumers taking matters into their own hands. They are becoming more knowledgeable, engaged, and are taking action to lessen the burden of their bills.

Figure 2 shows the projected cumulative capacity of installed rooftop solar and battery storage across Australia. To put this into context, the national maximum summer demand across the entire of the National Electricity Market (NEM) was 32.9GW in 2016/177.

According to this graph the cumulative installed capacity of rooftop solar is set to surpass demand of the entire NEM sometime around 2027, a mere eight years from now. 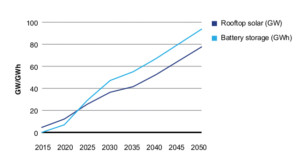 As the centralised generation and distribution model implies, the grid was designed and built for power to flow in one direction. The proliferation of uncontrolled PV generation, however, will mean that power will flow across the grid in both directions.

This places the grid under even greater pressure, as ‘reverse power flows’ create voltage imbalances and stability issues.

Figure 3 illustrates the impact of this, showing the projected decade in which reverse power flows from uncontrolled generation cause significant grid stability problems.

From this we can see that much of the grid will feel the impact in or before 2025, with regional areas being some of the earliest hit. 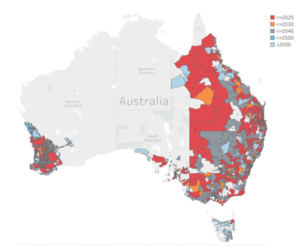 It is safe to say that the electricity sector will continue to face a turbulent future.

Consumers are unhappy and distrustful, technological innovation is driving change at an unprecedented rate, and the framework that governs it all is complex, with many interdependencies.

In June 2017, a Dr Alan Finkel-chaired expert panel convened by COAG conducted a review into the future security of the NEM entitled the Blueprint for the Future Security of the National Electricity Market8.

This document laid out the desired outcomes for the electricity system of security, increased reliability, increased customer reward and decreased emissions.

To meet these objectives, the structure of the regulatory environment should be shaped by a set of core principles:

Consumer sentiment is clear: they are no longer willing to shoulder the burden of rising electricity costs and are seeking to regain power in their relationship with energy.

Discontent combined with technological innovation are driving a seismic structural shift in the electricity industry.

Critically however, not all storage and generation assets are created equal, and currently the majority of batteries installed in Australia do not have a smart gateway attached, making them incapable of participating in a VPP.

The result is an increase in uncontrolled generation on the grid, ultimately driving up electricity costs for all consumers.

If policy around incentivising uptake of smart gateways for battery and PV owners in Australia is not set correctly, we are at risk of watching Australia’s global market advantage slip through our fingers.

Any reform agenda for electricity needs to start with refocusing regulation. The way the market is governed should be grounded within a set of core principles that seek to drive mutually beneficial outcomes for all those in the electricity value stack.

This will help reengage consumers, rebuild trust in industry and ultimately embrace the consumer revolution rather than resist it. The time is now for industry to respond in a proactive way to support the needs of the consumer both now and into the future.

This is an excerpt from a chapter originally published in the Australian Strategic Policy Institute  Special Report Designing for Resilient Energy Systems.