New transmission lines will be paramount to ensure cleaner and cheaper wind and solar power for Australia, but current concerns about the building time required and the amount of lines needed, will result in higher energy bills in the meantime.

RE-Alliance, a regional energy advocacy organisation, said there is a need to build significant amounts of new transmission lines over the next decade in the switch to renewable energy; around 10,000km, according to the Australian Energy Market Operator’s (AEMO) energy system roadmap, the 2022 Integrated System Plan (ISP). 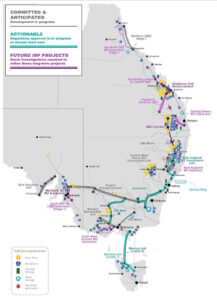 Some of the transmission lines will be in regional communities who have not previously hosted large energy infrastructure. Local concerns have emerged as a result of this, with some communities opposing lines in their region. These concerns are understandable: developers and governments have often very poorly communicated and consulted with communities.

Local landholders must be supported to participate in the transmission planning process earlier as key stakeholders and paid fairly for hosting towers on their land.

RE-Alliance said the national process for planning transmission lines is outdated and not fit for the task of upgrading our grid, which is also contributing significantly to delay.

According to RE-Alliance, there’s no doubt that building the transmission lines Australia needs, in the time needed to avoid the worst impacts of climate change, will be an immense challenge.

But what will be the cost if this buildout is delayed?

The modelling shows that prompt action to upgrade the grid will bring down the average price of electricity. If transmission lines are delayed, prices become higher and more volatile.

Other important findings include:

Tasmania would see a temporary fall in costs if Marinus Link was delayed, due to oversupply of renewable electricity locally – but prices would then rebound because consumers would lack the opportunity to have their electricity subsidised from exporting to the mainland. Generally, the earlier each transmission project becomes operational, the lower the wholesale energy costs are (as shown by the purple bars falling below zero).

As part of their modelling, Nexa Advisory notes that the Federal Government’s $20 billion Rewiring the Nation policy package has significant potential to remove key roadblocks and to supercharge the transmission build.

To be most efficient, they recommend that the package:

RE-Alliance is an independent, not-for-profit advocacy organisation working to secure an energy transformation that delivers long-term benefits and prosperity to regional Australia.