SA Water has installed 19,000 solar panels to power one of the nation’s largest drinking water pipelines, the Morgan to Whyalla Pipeline.

At a length of around 358km, and starting from SA Water’s Morgan Water Treatment Plant, the concrete pipeline transports treated, high-quality drinking water from the River Murray across to the Upper Spencer Gulf region.

The solar array forms part of SA Water’s industry-leading renewable energy project working towards a zero cost energy future, headlined by the installation of more than 500,000 solar panels across the state, producing a total of 242GW/h of green energy each year.

SA Water’s Senior Manager Zero Cost Energy Future, Nicola Murphy, said each panel at the pump station is constructed on a pivoted racking system, to track the sun from east to west throughout the day.

“Given the Morgan to Whyalla Pipeline is responsible for delivering clean, safe drinking water to tens of thousands of our customers from the Riverland, Barossa, Mid North and Upper Spencer Gulf regions, the energy requirements to pump such volumes of water are significant,” Ms Murphy said.

“With this large solar array now energised and capturing the sun’s rays, we are harnessing green energy to reduce our pumping expenses without any impact to the pump station’s overall performance.

“The direct current (DC) voltage captured by the panels is converted into high-voltage alternating current (AC) energy, where it travels underground to a connection point for use at the pump station.

“The array is one of four being installed along the Morgan to Whyalla Pipeline, with a further 15,000 solar panels at the fourth pump station outside Robertstown aiming to be energised by mid-2021.”

SA Water’s extensive water and wastewater operations make it one of South Australia’s largest electricity consumers, with the utility’s 2019-20 electricity costs reaching approximately $86 million.
“Increasing our renewable energy generation will help sustainably reduce operating expenses and ensure we can keep prices low and stable for our customers across the state,” Mr Murphy said.

“The positive impact of our zero cost energy future project also extends to the wider South Australian environment, with our total emissions reduction the equivalent of planting more than seven million trees, or removing more than 30,000 motor vehicles from the road every year of operation.”

SA Water’s zero cost energy future initiative has already seen around 160,000 solar panels positioned at sites like the Bolivar Wastewater Treatment Plant and the Adelaide Desalination Plant, with the remaining panels due to be installed over the coming months. 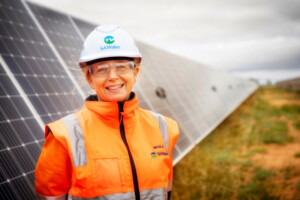