The rebates had been increased to fortnightly to keep up with demand after the monthly August allocation was exhausted in 90 minutes. 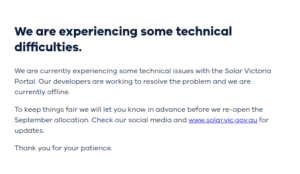 “Our developers are still working to resolve the technical issues from this morning. We understand customers are eager to apply for the solar rebate. We will provide an update on when the portal will reopen on social media and our website as soon as we can.”

Rebates will not be allocated until the problem is fixed and Solar Victoria will provide adequate warning before reopening the allocation for September.

“We are working to resolve the issues experienced this morning. We are currently offline.

To keep things fair we will let you know in advance before we reopen the September allocation,” Solar Victoria tweeted.

The announcement of the increased rebates was originally praised by industry, with Smart Energy Council CEO, John Grimes, stating that “the Victorian Government has listened to solar businesses and solar workers, and responded to their concerns.”

The new September allocation rebate date is yet to be confirmed.