Rays the roof: accommodating home solar and batteries into the grid Australian energy users are taking to distributed energy resources like home solar and batteries at a rapid pace, and while small-scale solar and renewable options will help to decarbonise the electricity sector in a way that’s both fast and economical, the rapid uptake of these technologies is causing ‘traffic jams’ in the network. Here, we examine the Australian Energy Market Commission’s plans to safely and efficiently integrate more home solar and batteries into the grid.

Australia’s aging energy infrastructure means that our system is ill-equipped to handle power flowing both to and from consumers. This means that a significant amount of solar potential is inaccessible, leaving consumers unable to export their solar energy because of daytime ‘traffic jams’ on the network.

Though this issue doesn’t currently affect all solar owners, it is worsening, and inaction will result in the system reaching its technical limits, forcing power networks to severely limit power exports or build expensive new poles and wires to cope with the new solar on its way.

According to Australian Energy Market Commission (AEMC) Chief Executive, Benn Barr, there are clear benefits to making the adoption of home solar and batteries more accessible to customers, but to do that “we need to make some changes to the power system”.

“Within ten years, half of all energy users will be using home energy options like solar,” Mr Barr said. “We must make sure this seismic shift doesn’t leave anyone behind because every Australian, whether they have solar or not, deserves an affordable, sustainable power system.”

As part of the Australian Renewable Energy Agency’s (ARENA) Distributed Energy Integration Program, consumer representatives, industry associations and energy market bodies and other stakeholders worked with the AEMC over nine months, with the aim of maximising the value of customers’ distributed energy resources (DER).

As a result, the AEMC was to change the rules, and has since handed down its draft determination.

Reforms at the network and customer level

1. Adjusting distribution networks’ existing incentives: This entails shifting the incentives to focus on services that support people in sending power back into the grid. This is expected to provide networks with more reason to deliver valuable export services to customers.

Currently, there is a lack of financial penalties for inadequate network export service, and little recompense for quality service.

3. Allow two-way pricing offers from networks: By providing networks with new pricing options, such as rewards for sending solar and battery power to the grid in times of high demand, customers have more incentives to purchase batteries or use the power they generate during peak grid times.

4. More flexible pricing at the network level: This would facilitate a menu of price options, designed by each network, based on their capability, customer preferences and government policies. This would enable more choice for customers, such as free export up to a limit or paid premium services that lock-in export during busy times.

“This is about creating tailored options, not blanket solutions,” Mr Barr said. “We want to open the solar gateway so more Australians can join the 2.6 million small solar owners who have already led the way. But it’s important to do this fairly. We want to avoid a first in, best dressed system because that limits the capacity for more solar into the grid.

“One option to deal with more solar traffic – building more poles and wires – is very expensive and ends up on all our energy bills whether we have solar or not. While the sun may be free, the poles and wires aren’t, so we think the key is to use the power system smarter to avoid costly overinvestment and keep new infrastructure to a minimum.”

A smart system will improve the flow of electricity in the power system, minimise impacts of demand peaks and troughs throughout the day, and capitalise more from the poles and wires already in place.

Successful integration of DER into the electricity system would see renewables connected to the grid in a way that makes the most of the ‘network platform’, and allocates costs in an efficient way.

High-quality export services – those that support consumers to export their power and take advantage of technology to do so – would be central to a smart power system. The AEMC likens this to technology many consumers are already familiar with – a Google Nest.

A high-quality export service might look similar to a smart home energy management system such as Google Nest, by providing networks with the data they need to identify what’s happening with the power flow.

From there, the networks could manage the system to accommodate more solar energy entering, thus allowing them to notify consumers when it is most advantageous to take from the system (i.e. for charging electric vehicles and other batteries), and when they should give back to the system by exporting their stored power.

The AEMC assures that this technology already exists and that this reform package would give networks the right incentives to incorporate it into the way they operate and do business. 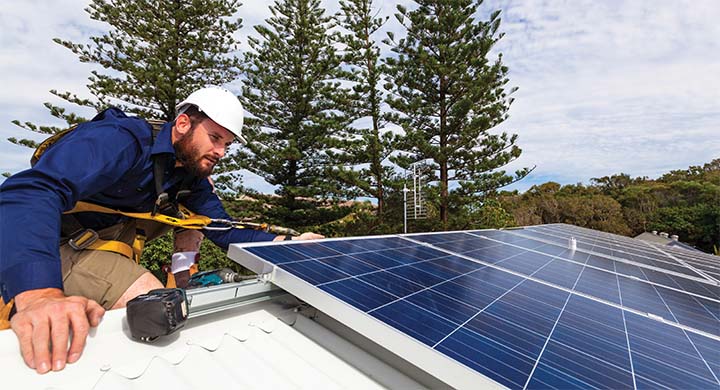 A system to benefit all types of consumers

A smart system would place customer preferences at the forefront in terms of driving network tariff design and the solar export services they receive. In this sense, the ‘customer’ refers to all energy consumers, whether they have solar or not, and distributes the benefits of solar evenly across the network.

“Letting networks give customer incentives to use the system better means supply and demand on the grid can be smoothed out over the course of the day. It helps address large amounts of solar being exported in the middle of the day when it benefits the system least,” Mr Barr said.

“We know there is a lot of interest in this issue. We’ve heard and understood the concern among some solar owners about whether they will be able to realise the value of their investment if the system changes.

“We want to reassure solar customers that we’re not proposing they should all start paying export charges. We expect networks to deliver pricing proposals in close consultation with consumers, which may include options where they don’t have to pay for exports.”

The AEMC said extra safeguards have also been proposed for the energy rules to protect existing and new solar customers, and non-solar customers.

Default charges have not been mandated within the proposal, and the AEMC said network businesses wanting to introduce export charging would need to consult extensively with customers, and prepare a transition plan detailing how this would be done, to be approved by the Australian Energy Regulator (AER).

The AEMC modelled the potential impact on customer bills if networks did introduce export charges, and found that 80 per cent of customers would see their bills drop because they would no longer pay for solar export services they weren’t using.

For the 20 per cent of customers with solar, there could be a range of export charge impacts, depending on system size. A 4-6kW system would still earn on average $900 – about $70 less than now. But this impact could look very different if they took up options that rewarded them for using the system differently – such as self-consuming power.

The AEMC also assures that the existing caps on what power networks can earn will still apply, even when export charges are implemented, and their five-yearly revenue would still be approved by the AER.

The time to act is now

Mr Barr said that these reforms will take some time to put into effect, and immediate action is required in order to mitigate major issues in the near future.

“We have to start planning for a different future now because there is still a lot of work to do and change will take time. If we start now, with the right caveats and protections in place, we will avoid costly crisis solutions further down the track,” Mr Barr said.

The AEMC will first give the community and industry an opportunity to respond to the draft determination before handing down a final determination in June 2021.

From there, when reforms are introduced, states and territories will be given a minimum of two years to develop their plans in consultation with consumers, before submitting them to the AER.

Consultation times may vary depending on proposal deadlines. The AER is set to make a final decision on NSW, ACT, NT and Tasmanian proposals in 2024. Queensland and SA proposals will be decided on in 2025, and in Victoria the decision will come in 2026.