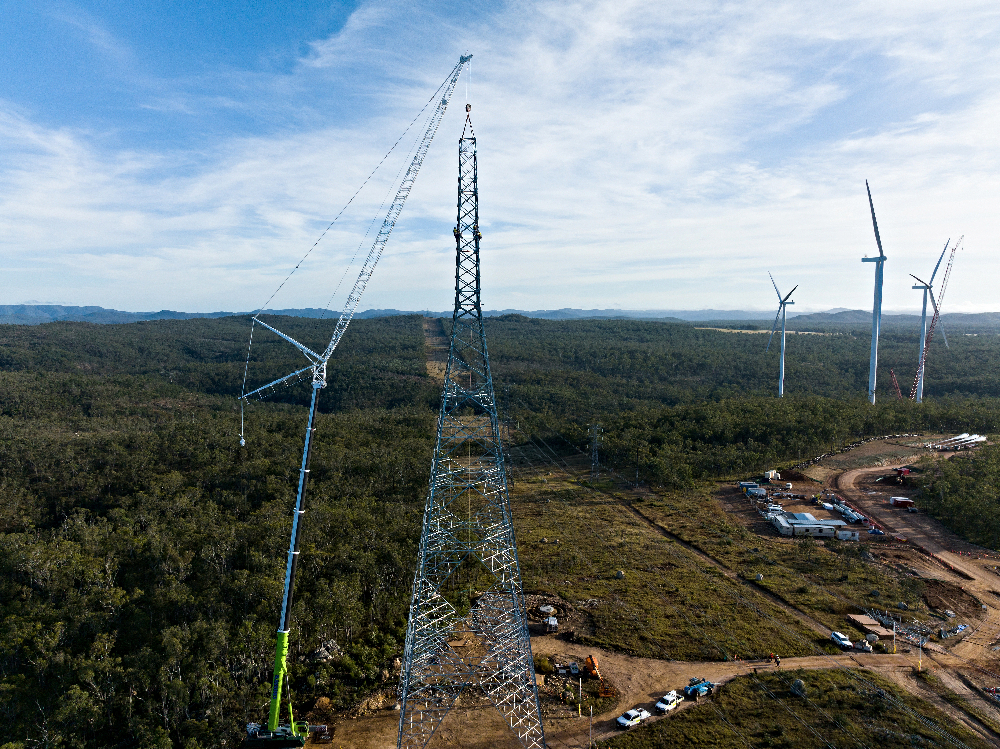 Powerlink has completed construction of the tallest transmission towers on its network, to connect a clean energy Power Hub to the electricity grid.

“The Northern QREZ involves delivering both the Kaban Green Power Hub and upgrading the capacity of the existing coastal transmission network between Townsville and Cairns,” Mr Simshauser said.

“This will strengthen the transmission network’s resiliency, security and reliability, and unlock an additional 500MW of capacity for connecting additional renewable energy projects in Far North Queensland.”

The Power Hub has supported 250 jobs and is set to deliver cleaner energy to 100,000 Queensland homes.

Mr Simshauser said it will be powered by electricity produced at nearby wind farms.

“CleanCo will use 100 per cent of the electricity produced at the wind farm to support commercial and industrial customers across Queensland to meet their renewable energy goals.”

Building the three transmission towers required to connect the Kaban Green Power Hub to the electricity grid was no mean feat, according to Mr Simshauser.

“Soaring an impressive 85m into the air, these towers were assembled on-site using cranes stretching more than 100m in height,” Mr Simshauser said.

“This new stretch of transmission line will cross directly over an existing 275kV line, increasing the technical complexity of the project.”

Powerlink’s specialised crews performed the tower assembly work with precision, which included raising the two tallest towers – each comprising 75MT of steel atop 20 cubic metres of concrete foundations, extending up to 6m underground.

“Work is now underway to complete stringing of the newly-built towers, which involves threading and tensioning the powerline wires between the towers using a drone,” Mr Simshauser said.

“We’ve had around 40 workers on-site each day to complete these highly specialised activities and are engaging local suppliers wherever possible.

“We are simultaneously growing our customer base and our access to energy so that we can provide tailored solutions to our large-scale commercial and industrial customers, supporting them to decarbonise,” Ms Walters said.

“With CleanCo taking 100 per cent of the energy from this project, it will be a major boost to our commitment to support the entry of 1,400MW of new renewable energy into the market by 2025.”

Neoen Managing Director Louis de Sambucy congratulated Powerlink for completing the transmission towers at Kaban, and thanked the Powerlink team for delivering this critical component and for their continued commitment to the project.

“The Neoen team, working closely with Vestas, are fully mobilised to deliver the project on time and in a safe and highly professional manner,” Mr de Sambucy said.

“Kaban will bring much needed additional clean energy to the network, with first generation targeted ahead of next summer.

“We are proud of Kaban’s foundational role in the Northern QREZ and we’d like to thank Powerlink, CleanCo and the Queensland Government for continuing to place their trust in us.”