Located at Zetland’s East Village Shopping Centre, the charging station will mean two cars can charge at 350kW simultaneously, capable of delivering up to 400km of charge in 15 mins (or 200km of charge in eight minutes), backed up by 100 per cent renewable energy.

Marty Andrews, Chargefox CEO, said, “From day one, our vision has been to see 100 per cent of road travel powered by renewable energy, and our ultra-rapid chargers accessible to all Australians. Today’s announcement – in Australia’s most populous city – brings us one step closer to that vision. 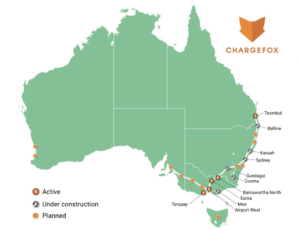 “We aim to make EV charging as fast and easy as possible for all Australians, and we’re excited to be leading the way in delivering world leading infrastructure backed by renewable energy, like at this site.”

Fast charging stations are capable of adding up to 60km of range in 15 minutes.

When combined with the current 25 fast chargers operated by NRMA (plus an additional 15 to be rolled out before the end of the year), NSW is fast becoming one of Australia’s best serviced states for EV drivers.

“We are proud to support this project that will add to our already extensive network of EV chargers across the state and further open up NSW to the next generation of motorists.

“We know that range anxiety is a real barrier to the uptake of EVs now and into the future so more chargers will go a long way to alleviating concerns.” Chargefox recently announced their plans to roll out an additional 50 ultra rapid charging sites around Australia and revealed the locations of the next 16  sites they have in development. The Chargefox ultra-rapid network will soon connect Brisbane, Sydney, Canberra, Melbourne, Adelaide and Cairns. Additional sites in Western Australia and Tasmania are also planned.

“With six ultra-rapid stations open along the East Coast – all backed by renewable energy – and partnerships with Jaguar, Nissan and BMW, this has been a milestone year for Chargefox,” said Mr Andrews.

“We’ve processed over 50,000 charging sessions on more than 1,000 plugs across Australia, dispensing a total of over 400 MWh of electricity – that’s enough electricity to power the average household for a decade.”