The Solar SETuP program will provide 10MW of solar, enough to power 1750 remote households, and reduce the amount of diesel used in generators by at least 15 per cent. The $59 million program is co-funded by the Australian Government’s Australian Renewable Energy Agency (ARENA), and was an award winner at the recent Northern Territory Engineering Excellence Awards.

Power and Water Corporation is transforming its approach to remote power stations with the integration of solar to its diesel power stations, including piloting the use of battery storage.

The project specifications include the installation of solar panels on land near the community they serve, creating a solar farm. The panel’s solar cells are thin plates of light sensitive material, usually silicon. Sunlight frees electrons to move through the cells in a photovoltaic effect, making direct current (DC).

The DC is transformed into alternating current (AC) by banks of inverters channelled into the nearest infrastructure, and then into homes. One inverter can collect energy from about 80 panels.

The array is electrically bonded and comprehensively earthed, and a lightning protection system is erected. Once the solar farms are up and running they are largely maintenance free.

Engaging with each community is a major part of the project. Each community is located on Aboriginal land, so there are significant cultural considerations in the project planning phase. The project team undertakes detailed negotiation to ensure they have the proper permissions in place to install the infrastructure and remains engaged with the community throughout the project.

Generally, Aboriginal communities have embraced the technology which is viewed as getting “energy from country”.

There are also immense logistical challenges in getting the infrastructure in place, including the harsh tropical climate, the tyranny of distance and complex access issues. 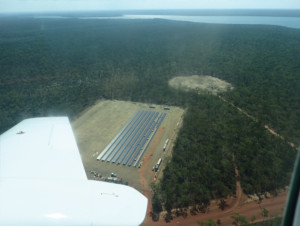 The Maningrida solar farm from the air

Maningrida is around 500km from Darwin, with seasonal road access via a network of sealed, gravel and dirt roads. From December to March, the Top End wet season, the road is often impassable.

It is located at the junction of the Liverpool River and Arafura Sea. Its traditional owners are the Kunibidji people. It was established as a permanent settlement by Aboriginal people in the 1940s and was converted to a mission in the 1950s.

With a population of 3000, it is now a major centre in Arnhem Land and has a school, health clinic, service station, convenience store and café, two supermarkets, a police station, crèche and a community arts centre. Goods can be transported in and out of the community on the weekly barge service.

Its solar farm has 2500 panels located in a fenced compound about two kilometres from town. Previously woodland, the compound was cleared and constructed with the help of locals. The resulting tree bark was offered to the local arts centre to be used for bark painting and mulch was provided to the community for landscaping.

The SETuP PV installations at Maningrida have operated since February 2017 and are saving around 300,000 litres of diesel fuel a year. The panels will produce enough clean electricity to power 130 households in the community and reduce its reliance on diesel fuel by 15 per cent.