An exciting two-year, $2.9m project led by The University of Queensland and part-funded by the Australian Renewable Energy Agency’s (ARENA’s) Advancing Renewables Program is developing and trialling a highly sophisticated distribution network analysis tool to lower the barriers to the connection of mid-sized solar PV systems to the network.

The University of Queensland’s Solar Enablement Initiative is less than a year old, but so far, all signs are indicating that it will not only deliver on its objective, but identify myriad other uses for the State Estimation Algorithm that underpins the analysis tool.

The adoption rate of solar PV systems reached dizzying heights in Australia in 2012 thanks to federal and state government incentives, electricity prices, falling PV system prices, and a growing desire by some customers for more control over their electricity supply. Solar PV installation rates slowed until early 2017, then began increasing again and show no signs of abating.

Australian businesses were slower to adopt solar PV, but that is changing as many see the economic, environmental and even marketing value. The high rate of PV penetration in many areas means electricity distribution network operators (distributors) must conduct a desktop technical assessment of every application to connect a PV system above a designated capacity (generally 30kW).

Naturally, these are mostly on business premises.

Those assessments are complex, time-consuming and based, to varying extents, on assumed data. The assessor and their tools must assume a conservative, even worst-case, scenario of electricity demand and PV generation to ensure that the operation of the PV system will not interfere with the electricity supply to other customers on the local network at any time.

Often, assessment outcomes will dictate that to be able to connect the desired capacity and configuration, the customer must fund network upgrades or adjustments, as well as network protection devices as part of their PV system. 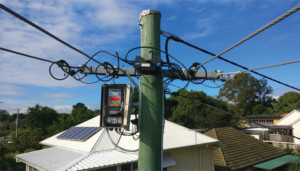 Sometimes, these unforeseen costs make the PV installation unviable for the customer. Distributors must juggle the competing priorities of meeting government, customer and PV industry expectations that customers who want to have PV systems installed be allowed to, with the technical reality of electricity networks not being originally designed to accommodate the electrical impacts that PV systems have on them.

The project’s key objective is to demonstrate that the semi-automated network analysis tool and the State Estimation Algorithm (SEA) provide a reliable mechanism to allow more flexibility in a PV system’s operation, and thereby reduce the protective measures that currently need to be adopted and funded by the customer.

In the simplest terms, the SEA combines and uses data on known parameters of the network, transformer set-points and outputs of voltage power flow meters in conjunction with statistical data about the typical network utilisation. From these thousands of pieces of data, the SEA creates a more complete understanding of load flows and other aspects of the network’s operational state than has ever been possible.

State Estimation is used extensively at the transmission network level where it enables a greatly improved utilisation of the network’s true operational capacity, but hasn’t, until now, been adapted for use at the distribution level.

In addition, the project will trial the ability of a distributor to use the SEA, among other tools, to dynamically reassess, and possibly raise, current limits imposed on the export of a PV system at times, thereby allowing it to export as needed most of the time. This outcome would create financial and other benefits for the customer, reduce network risks, enhance network benefits and help “green the grid” by facilitating much more renewable energy export than otherwise possible. Comparisons of early applications of the State Estimation Algorithm SEA) with measured states over this two-day period show strong correlations. Differences will be reduces with refinements to the SEA.

The tools will be trialled on seven network feeders across the three distribution networks. The distributors – Energex in South East Queensland, United Energy in south-east Melbourne, and TasNetworks across Tasmania – have quite different network topologies, data systems and solar PV penetration rates. The feeders selected also have different network topologies, customer types and even weather conditions.

The core project team at The University of Queensland is led by Professor Simon Bartlett, who brings to it over 40 years of experience in the electric power industry and academia. The SEA development is led by Dr Olav Krause, supported by six full-time researchers.

In addition to the $1.19 million in funding from ARENA, the API, ENA and Springfield City Group have all made financial contributions, with all project partners providing substantial in-kind contributions, including Energex providing a Project Manager.

For the Springfield City Group, master developer of Greater Springfield just south-west of Brisbane, involvement in this project is a reflection of the exciting vision that team has for the interconnected role that electricity and information technology has in their city’s development. They will host the first trial of a distributor, giving a customer access to dynamic export permissions for controlling the export of a privately-owned, mid-sized solar PV system using the State Estimation Algorithm as a basis.

These are exciting times to be helping to create more intelligent electricity grids that enhance their role as enablers of customer desires for greater choice and control in their electricity supply and use.

It is hoped that the project will allow more Queensland residents to install solar panels on their homes and enjoy the benefits of solar power.

For more information about the solar enablement initiative, contact: