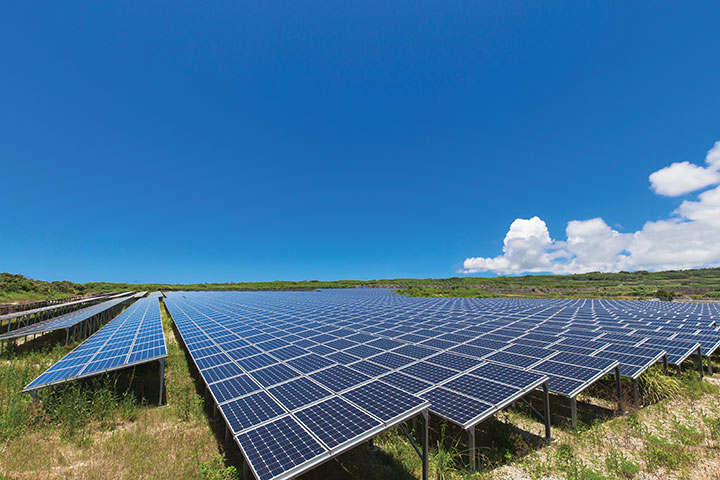 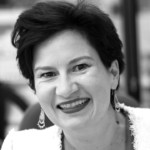 Electricity is critical to our well-being and the functioning of a modern economy. The grid in Australia has been described as one of the biggest machines on earth. It is a machine that is going through an unprecedented level of change and as a result we are seeing the way that power is generated and delivered is changing quickly. The industry is facing both policy and investment challenges which must be either managed or resolved as a matter of urgency.

A key driver of the investment challenge is the rolling series of closures of older coal-fired generation. The Australian Energy Market Operator’s timeline of plants that are retiring or reaching 50 years of service (see Figure 1) illustrates the steady departure of coal generation plants from the National Electricity Market (NEM).

This capacity will be replaced by newer lower emissions technologies, including new large-scale renewable generation. What differentiates this generation is that it is not a like-for-like replacement.

We will continue to need plants and technology that are dispatchable – or put another way, plants that can be turned on or that can increase output to balance supply and demand. 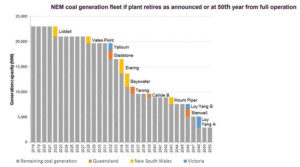 It will also require significant new investment. Exactly how much depends on a range of factors including technology costs, changes to carbon and energy policies, the timing when older plants retire and more.

Unsurprisingly, it gets more challenging to make a meaningful estimate the further into the future we look. The price of technologies, particularly renewables like wind and solar, have fallen quickly and made previous assumptions redundant. New coal is now more expensive per megawatt hour than new wind and solar, this is even after renewables have been backed up by technologies like peaking gas-fired power stations.

To get a better sense of the investment challenge, the Australian Energy Council recently commissioned Newgrange Consulting to look at the likely costs, as well as the possible mix of generation that we might see to 2030. 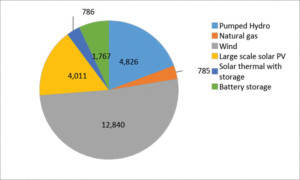 These shares are predictions based on projections of relative technology costs assuming the market is allowed to choose the best way to meet customers’ need for reliable supply and the Commonwealth’s emissions target for the sector. If the market is distorted or policy settings remain uncertain, costs will be higher.

Additional investment is likely to be required to develop the transmission and distribution networks to deliver the electricity to homes and businesses. It is anticipated that substantial amounts will be spent by households and businesses on rooftop solar, battery storage and other distributed energy resources, and additional spending will be required to maintain existing electricity system assets.

Generation is more sensitive than other types of electricity infrastructure investment to the kind of stop-start policy that we have seen in Australia for more than a decade. The National Energy Guarantee is the sixth iteration of a proposed national energy policy.

It currently has the support of Federal and State governments, and the Energy Security Board appointed by those governments must now work through the detail of how the scheme would work in practice. That consultation will be concluded by August, at which point the Federal Minister will seek the support of the state and territory governments to proceed to implementation.

Industry is keen to see an end to the policy uncertainty of the past decade in order to stabilise investment signals. The uncertainty does not just impact higher carbon emitting forms of generation like coal-fired plants. The Newgrange report notes that the return on a renewable generator can also be affected by policy uncertainty, as it does not have clarity on the treatment of its competition, the more emissions intensive generators. Unsurprisingly, 90 per cent of the new generation build will be in the NEM covering the eastern seaboard states, South Australia and Tasmania. The largest amount of new capacity will be in New South Wales, followed by Queensland and South Australia.

The expected capacity across the different states of the NEM and WA’s Wholesale Electricity Market (WEM)1 is 13,431MW as shown below (note the smaller grids in northern WA and NT were excluded). 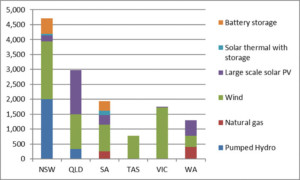 The NEM is designed to balance supply and demand. The wholesale price indicates when supply is scarce and in this way works to encourage the development of new capacity to meet demand.

The Newgrange report concludes that investment cannot be taken for granted, and that policymakers need to understand the value of stability to the sector. The industry will continue to advocate for a national energy policy to be put in place to deliver that much-needed stability and enable it to focus on the critical transformation of the sector that lies ahead.