Australia’s energy industry, like much of the world, is on a journey to cleaner, more reliable and more sustainable power – colloquially dubbed as ‘the transition’. The ongoing challenge dominates the conversation in the industry, and in state and federal politics. But, it’s not simply an industry or a political issue, nor is it solely an environmental or economical issue. As Secretary General and CEO of the World Energy Council, Dr Angela Wilkinson, would put it – it’s a human issue.

The World Energy Council, formed in 1923, is a network of the world’s principal independent and impartial energy leaders. The council acts as the leading global energy body, with over 3,000 member organisations spanning 90 countries.

The purpose of the council is to inform energy strategies across the world through high-level events, including the World Energy Congress, and publishing authoritative reports to inform energy policy dialogue.

One such report is the 2022 World Issues Monitor: Energy in uproar – achieving commitments through community action, which outlines the critical uncertainties and priorities of actions as identified by 2,200 surveyed energy policymakers, CEOs, and leading experts.

“Our mission is to secure the benefits of sustainable energy for everybody,” Dr Wilkinson said. “So, more sustainable energy, climate neutrality and social justice.” It’s an extensive scope of works, but within it is a particular and rather personal focus.

“Our current vision is humanising energy, because we need to involve more people and communities in delivering a successful global energy transition.” 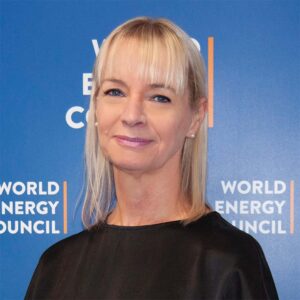 Humanising energy: key to the transition

Dr Wilkinson explained that the energy leadership landscape is becoming increasingly crowded, competitive and conflictual – and that with this comes the risk of extreme polarisation, an unhelpful outcome for any modern energy society.

A big component of this potential polarisation is the language that’s used in the energy dialogue, and how technocratic vernacular can be a barrier to including consumers in the conversation. “I think the energy industry does itself a disfavour – it’s never been very good at communicating,” Dr Wilkinson said.

In the World Energy Council’s World Energy Trilemma Index 2021, Dr Wilkinson stated that energy agendas were in need of a serious priority check, “Some advocates wrangle over the colour of new fuel types, whilst billions of people have no connection to electricity, or lack access to quality energy for clean cooking, better health, and new livelihoods. Some voices are powerful, yet many remain literally power-less.”

Part of the ‘humanising energy’ strategy is ensuring ‘energy literacy’ is as ubiquitous as possible. Like digital or financial literacy, Dr Wilkinson believes that energy literacy is essential to flourishing societies. Language makes up a big part of that, but it’s not solely a communications issue – especially when it comes to the global energy transition, the impacts of which are felt everywhere, not just within the industry.

“Fundamentally, our society’s relationship with energy is changing, and as that relationship changes, so does our relationship with each other. And we’re talking about achieving a global energy transition in a faster time than ever before in human history, and in a way which is successfully managed,” Dr Wilkinson said.

“There are large parts of society that are totally unprepared for the real choices and the depth of change that’s involved. We’re never going to achieve success unless we involve them, unless we equip them, unless we help them articulate their role and their story in the energy transition.”

Dr Wilkinson asserts that, in addition to energy affordability, sustainability and climate neutrality, it’s imperative that we factor in social justice to the overall transition equation. A stark reminder of this was the energy transition from coal to gas in the UK in the 1980s, which left a lot of community members stranded.

“It left a lot of people out of jobs, and we carry those political scars today,” Dr Wilkinson said. The abrupt closure of coal mines in the UK was followed by rioting and mass unemployment levels and, subsequently, severe political disenfranchisement in mining communities.

Dr Wilkinson said there are lots of similarities between those UK mining communities, and those in the US and Australia, and therefore the learnings can be carried over in terms of creating smoother energy transitions – ones that don’t leave communities in the cold.

Aberdeen, a city in north-east Scotland, is, like much of the world, embarking on a journey to cleaner energy, but it’s not easy – especially with its roots firmly planted in oil and gas.

“If you think about Aberdeen, you think about the gateway to the north sea in oil and gas production terms,” Dr Wilkinson said. “Their identity as a city is wedded to oil and gas. So, how can we help them involve citizens in thinking about the choices they face and in rebuilding Aberdeen’s identity as a world energy city that is successfully managing its energy transition?”

There’s no magic recipe, according to Dr Wilkinson, but the important part is to include the humanisation element into conversations and decision-making. For each community, the ways in which they find their way through this transition and how they facilitate workforce transition and skills diversification will be unique.

That’s why the community needs to be “at the table” when it comes to solutions dialogue, to be a part of that process. A vision and prospectus report published by the Aberdeen City Council, A climate- positive city at the heart of the global energy transition, outlines the importance of community in redefining the city’s progressive role in the energy world.

The report states, “Moving to a future of net zero carbon emissions and beyond, whilst ensuring that everyone can prosper, regardless of status or income, is often termed a ‘just transition’ and should be a key guiding principle for Aberdeen.

So, at the same time as helping to catalyse the global energy transition, we need to realise shared opportunity and prosperity for all of our local people and communities by embedding just transition principles at the heart of every climate action we bring forward.”

How does Australia’s energy stack up against the rest of the world?

The World Energy Trilemma Index was designed as the first energy policy decision-support tool, creating a critical integrated policy framework which could aid in the development of sustainable energy systems. The report states, “While Energy Security is rated A relative to the rest of the world, the score itself of 64 is low in absolute terms”. This can be attributed to a lack of diversity in generation and storage, however, the generation mix is changing with battery, pumped hydro and gas storage set as focus areas for federal and state governments.

Australia achieved one of the strongest Energy Equity scores, driven largely by a focus on reliability, access and affordability.

“Affordability in particular is a key focus for the government, given the changing energy mix, uncertainty over fossil fuel prices and enormous geographic scale of the  energy system,” the report states.

Australia demonstrated poor performance in terms of Environmental Sustainability, specifically with a substandard penetration of renewables and CO2 emissions per capita.

“The Federal Government has been seen to be relatively skeptical of climate change historically, and strong support still remains for the fossil fuel industry,” the report states.

The 2021 trilemma scores recorded for Australia showed little change in the three dimensions from the past year, indicating that Australia was relatively unaffected by the COVID-19 pandemic, and has almost no reliance on energy imports.

However, Australia’s ranking does not reflect its potential, according to the report, “Given Australia’s strong macro-economic and development fundamentals, wide-scale solar and wind resources, plus insulation from COVID-19, one might expect a global ranking of higher than 18.

Sweden – a consistently high-ranking country on the World Energy Trilemma Index – demonstrates a strong emphasis on equality and social security. The report states, “Swedish energy policy is governed by the triangle of sustainability, affordability and energy security.

The overall top three improving countries since 2000 were Cambodia, Myanmar and the Dominican Republic, which may have low overall ranks but have demonstrated noteworthy efforts to improve their energy systems. Cities like Aberdeen, Scotland, have a long history with fossil fuels – and it’s going to take a community-led approach to change that.

The World Energy Council recently published its 13th iteration of the World Energy Issues Monitor, representing the largest survey of its kind of senior energy professionals, governments and civil society.  The World Issues Monitor Survey was undertaken promptly after the COP26 held in November 2021.

“Leadership uncertainty reflects the complex challenges of coordinating actions on net zero energy uses, without triggering new threats to regional and global stability.” The World Issues Monitor indicates that, despite a certain level of optimism coming out of COP26, climate change was eclipsed by the concern from rising energy costs, and didn’t make it to the top of leaders’ list of critical uncertainties.

Renewable energies were defined as action priority, while hydrogen remains to be viewed with a high degree of uncertainty across most regions as leaders explore how to build a functioning hydrogen economy.

Amidst all the mounting uncertainty, the World Issues Monitor also reported a significant focus on issues affecting equity, with quality energy access featuring as an action priority for the first time, across all regions.

“This suggests that global leaders recognise the need to humanise the energy transition by building equity and resilience, and ensuring reliable, affordable and safe energy supply for all,” the report states.

In Australia, there are a plethora of opportunities to humanise our energy system, according to Dr Wilkinson. “There’s a lot going on in Australia around innovation, around hydrogen, around batteries, around different choices and options. And now it’s about really activating this community-led system change at every level of society.”

As for the rest of the global energy industry and the ongoing transition to net zero? The answer remains much the same.

“The world cannot wait for full consensus, nor for intelligent machines to deliver the answer. The next big thing in energy is not a moon-shot technology but thousands of smaller steps that mobilise sufficient critical mass and accelerate human-centric know-how in securing quality energy access for all.”