From the Northern Territory to Singapore: the Australia-Asia PowerLink As more renewables are being injected into the grid, transmission is quickly being established as the vehicle for the energy transition. One promising project that’s combining both is Sun Cable’s $30 billion Australia-Asia PowerLink (AAPowerLink), which will include the world’s largest solar farm and battery storage facility, as well as a 5,000km transmission system. Energy magazine spoke with Sun Cable CEO and Founder, David Griffin, about the future of its marquee project and how this will transform the future of energy in the Asia-Pacific region. 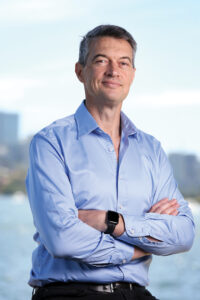 The 17-20GWp solar farm and 36-42GWh battery energy storage located near Elliott, Northern Territory, will supply renewable electricity via 800km of overhead transmission lines to Darwin and then via a 4,200km undersea high voltage direct current (HVDC) transmission network to Singapore. The project will be capable of supplying 800 MW to Darwin and supply up to 15 per cent of Singapore’s electricity needs.

Sun Cable has formed the Integrated Project Delivery Team (IPDT), a global consortium of industry leaders to deliver the AAPowerLink including Bechtel, Hatch, SMEC (a member of the Surbana Jurong Group), Marsh, and PwC Australia. The Federal and Northern Territory Governments have also granted the AAPowerLink Major Project Status and it has been listed on the Infrastructure Australia Priority List in recognition of its national strategic significance.

Currently, Singapore relies on gas for approximately 95 per cent of its electricity generation. In order to improve this, the Singapore Energy Market Authority introduced a ‘Four Switches’ Policy, which seeks to increase renewable electricity imports.

The Northern Territory Government is pursuing progressive renewable energy and economic targets of 50 per cent renewables and a $40 billion economy by 2030 (up from $26 billion in 2021). This presents significant opportunities to support local economic development while supporting decarbonisation.

“The AAPowerLink will deliver jobs, education, and training opportunities for Territorians, including regional Aboriginal communities across the Territory.” Mr Griffin said.

For Mr Griffin, the inspiration behind AAPowerLink was borne from Australia’s unique solar generation potential.

“Throughout my career of developing large-scale solar and wind projects in Australia and South Africa, I have always been astounded by the scale and quality of solar resources that exist in Australia,” Mr Griffin said.

“This resource, matched with the immense electricity needs of the AsiaPacific region, presented an enormous opportunity for Australia to be a renewable electricity export superpower.

“In 2018, it became apparent that technological developments and commercial progress of three technologies had reached a point whereby it was technically and commercially viable to transmit renewable energy on an intercontinental basis.”

Mr Griffin said these developments include:

“This realisation led me to establish Sun Cable, with the AAPowerLink as our marquee project.” Mr Griffin said. “Australia has been an energy exporter for many decades,” Mr Griffin said.

“The AAPowerLink will enable energy exports for the 21st century, in the form of a new renewable electricity export industry, allowing supply to high demand markets in the Asia-Pacific region.

Mr Griffin said Australia’s ability to export renewable energy will be possible through a multi-pronged approach, making use of HVDC subsea cable transmission, green hydrogen and other energy carriers – with grid interconnectedness at the heart.

Mr Griffin said Sun Cable’s vision is for an interconnected electricity grid throughout the Asia-Pacific region, which connects renewable energy resources from where they are most abundant (Australia) to where they are needed.

“The concept of grid interconnection is not new and the technology is well established and proven. In Europe there are 400 million electricity customers connected across 26 countries. They have already reached ten per cent interconnectedness and are aiming for 15 per cent by 2030,” Mr Griffin said.

“Grid interconnectedness is still nascent in the Asia Pacific region. We are working to increase awareness of the importance and benefits of grid interconnection.”

Sun Cable’s research and insights has estimated that if the Asia Pacific reached 15 per cent grid interconnection by 2040, there would be:

In March 2022, Sun Cable completed a $210 million Series B capital raise, contributed to by billionaires Mike Cannon-Brookes and Andrew Forrest, to fund the development work of the project and to accelerate the progress of the company’s portfolio of multi-gigawatt generation and transmission projects.

“Sun Cable is grateful that all of our shareholders have continued to support the company by investing again in our recent Series B capital raise,” Mr Griffin said.

First, but not last, of its kind

The AAPowerLink is currently in the development stage. Once financial close has been reached, construction of the AAPowerLink will begin.

“Through developing this project, Australia and the Asia-Pacific region will experience substantial growth in technology, skills, and supply chain benefits,” Mr Griffin said.

According to Mr Griffin, the scale of the AAPowerLink will drive significant investment in manufacturing and incentivise R&D to increase efficiency, reduce risk and innovate, while its replicable IP design will support more projects in meeting energy demand.

In addition, as scale and innovations reduce the cost of renewable electricity, the international competitiveness of alternative green energy carriers such as green hydrogen, ammonia and green aluminium are expected to rapidly increase, driving production volumes and demand for renewable electricity.

Mr Griffin said the Australia-Asia PowerLink is a pioneer project that will provide a pathway for a sustainable and connected Asia-Pacific energy system.