Australia is currently enjoying an energy storage boom. In 2017, Australians installed more energy storage (batteries, solar thermal and pumped hydro) than any other country in the world, with 246MW of power capacity added to the grid, according to a GTM Research report released recently.

Australia was also second in the world for energy capacity (MWh) added, just behind the United States. To cap it all off, Australia was number one globally for household storage installations. Australia’s love affair with the technology is growing in leaps and bounds, with no signs of slowing down.

The combination of high electricity prices, the falling costs of renewable energy and batteries, and supportive state government policies have turned Australia into a world leader on energy storage in the space of just a few years.

The high cost of electricity has meant that new technologies, particularly batteries, are becoming competitive with established technologies more quickly than they otherwise would. Grid-scale batteries are already competitive with peaking gas power stations, as has been recently demonstrated in California, where solar and batteries are beating out gas to provide electricity during peak periods at the lowest cost.

The high cost of electricity has been one of the main drivers behind the rapid uptake of household solar. Household solar in Australia has reached over 6,000MW – over twice the size of Australia’s largest coal-fired power station.

With many Australian homes now generating some of their own electricity, many households are considering installing batteries as well. In 2017, over 20,000 households installed batteries – three times the total for 2016.

Batteries enable households to store electricity during the middle of the day – when solar panels are producing the most electricity – and discharge it in the evenings, when more power is needed.

While household energy storage is not yet an affordable option for all households, it is not far away. Battery costs have already fallen by around 80 per cent since 2010 and may halve again by 2025. 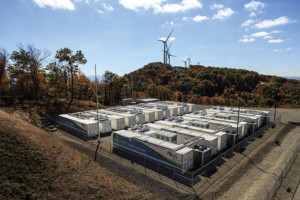 Australia’s National Electricity Market is one of the longest electricity grids in the world, extending from regional Queensland, down to Tasmania and South Australia, with states and territories connected by a small number of high voltage transmission lines called interconnectors.

With such a long skinny grid and large distances between the sources of generation and consumption, energy storage – particularly batteries – can play an important role in securing electricity supply.

Power grids must operate within specific technical requirements (such as frequency and voltage) to maintain a reliable and secure supply of electricity, avoiding blackouts.

Batteries can respond far more quickly to fluctuations in electrical frequency and voltage than other generators.

Batteries can also help reduce electricity prices across the board by eliminating price spikes that occur in the frequency control and ancillary services markets (FCAS). When the Heywood interconnector that connects South Australia’s electricity supply with Victoria is not operating, the Australian Energy Market Operator (AEMO) needs 35MW of capacity from these large power stations to provide these essential FCAS grid services.

On numerous occasions, these generators have restricted FCAS supply, driving up the cost of these services by millions of dollars.

The increased competition is already reducing prices. The cost of one type of FCAS (called raise and lower regulation) is estimated to have fallen to just $39,661 in December 2017, compared to $502,320 one year earlier.

Australia’s embrace of energy storage can also assist the transition to a 100 per cent renewable energy powered grid, playing a crucial role in cutting the nation’s greenhouse gas pollution levels that have been increasing every quarter since March 2015.

Transition to a clean economy

In order to avoid the effects of intensifying climate change, such as extreme weather events, Australia must rapidly transition to a clean economy and a key part of this transition involves moving away from fossil fuels towards renewable energy sources, like wind and solar.

Pumped hydro in particular has a key role to play in the transition from fossil fuels to renewable energy. Pumped hydro can store large amounts of electricity which can then affordably supply the grid for several hours. 22,000 potential pumped hydro sites have been identified around Australia, including abandoned mine sites, and it is estimated only 0.1 per cent of these sites would need to be developed to support a 100 per cent renewable electricity grid.

In Queensland, the abandoned Kidston Gold Mine is being converted into a pumped hydro power station that may be able to provide 2,000MWh of energy storage.

Australia has become a global leader in energy storage. This places Australia in a unique position to speed up our transition to a renewable electricity grid. An energy system powered by renewable energy and storage can deliver power 24/7, help reduce electricity prices by increasing competition, improving the flexibility and security of the electricity system, and reducing Australia’s reliance on expensive gas – all the while reducing pollution and tackling climate change.