Energy accelerated: Australia can lead the energy future if it embraces action now The debate surrounding Australia’s energy policy is fractured but valuable opportunities in the new energy future await if the industry moves fast and together.

Despite almost daily headlines about energy policy and the trail of former prime ministers it has skewered, the sector is marking rapid growth in household solar and there is a strong appetite in utility-scale renewables.

Corporate Australia is leading consumers to the new energy future, with banks, miners and retailers leading a shift to boost their green credentials among institutional investors and shareholders.

Companies, including banks, are leading the space to new environmental products and services.

Consumers are driving this shift and from a pure business point of view, the cost of renewables has been driven down considerably.

Bloomberg New Energy Finance has predicted $US11.5 trillion will be invested in new generation capacity in the next three decades, and the investment in wind and solar is estimated at $US8.4 trillion in the same period.

Despite the lack of energy policy progression, companies have begun firmly embracing the clean energy agenda, in the anticipation of carbon liabilities and potential future revenue streams.

Globally two-thirds of Fortune 100 companies have explicit renewable energy targets and 152 companies of the RE100 companies – a who’s who of global iconic brands – are committed to going 100 per cent renewable.

Deloitte’s Energy accelerated report explores where to now for Australia.

Will Australia move fast and together, lead, lag or stagnate? The reality is policy certainty would make it easier for the market and less expensive to transition if it was aligned to where industry is heading.

Deloitte’s modelling has identified four scenarios which outline the future of energy domestically to assist the energy sector position itself for the future.

This report highlights there is a clear opportunity for Australia to lead the world in clean energy in a once in a lifetime shift, and if we lag or stagnate, we risk missing business and commercial opportunities. 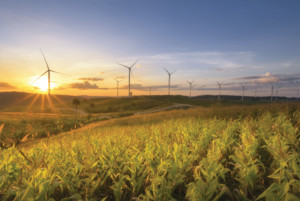 A mix of renewable energy sources including solar and wind, supported by energy storage options including batteries, pumped hydro and hydrogen, and underpinned by gas, will provide critical firming capacity to support intermittent renewable sources needs.

An increased use of renewables, more gas and a reduction in coal are evident in all four scenarios and this gives power companies and large consumers’ strategies and alternatives as the fuel mix evolves.

Australia has one of the most advanced energy markets in the world. It is a test case for disruption, the development of new trading models, reconfiguration of energy networks and the development of innovative smart energy technologies.

South Australia leads the charge in world-leading renewables with storage on track for 100 per cent renewables by 2025. South Australia is also leading early pilot stage trials for hydrogen production, a $US2.5 trillion global industry, according to Morgan Stanley.

The sector is embracing low carbon energy and should continue to, in order to harness untold opportunities to boost Australia’s economic growth, draw foreign investment and put Australia firmly in place as a world-leading international innovation hub.

To the north, Asia represents a $290 billion export opportunity, according to an analysis by the International Energy Association. The Australian Renewable Energy Agency (ARENA) estimates low emissions hydrogen could contribute $1.7 billion to the Australian economy annually.

Australia’s Chief Scientist Alan Finkel has pegged hydrogen as the next multi-billion export industry, saying the long held dream of meeting energy needs with clean hydrogen is becoming a reality.

Energy accelerated identifies the need for stakeholders to collaborate and quickly mobilise resources to successfully capitalise on the opportunities within the grasp of Australian industry.

Competitive dynamics are shifting – new energy is more collaborative, with industry, business, government and consumers set to work seamlessly together in the new energy mix to underpin supply and shift costs down for consumers.

What needs to transpire is for industry to recognise the opportunities and aspire to innovate to provide a technological and societal advantage for Australia in the energy future.

The shift towards renewables, which are now at price parity with traditional supply, poses a number of questions.

What role will traditional suppliers play in Australia’s energy future?

A trilogy of constructs – policy, consumer and new technologies – will drive each of the four identified scenarios in Energy accelerated and that is driving transformation.

North Asia is the economic imperative driving the shift by traditional energy companies towards the hydrogen future.

There is a shift among traditional global energy producers who are looking at building hydrogen networks and a generation of hydrogen through electrolysis.

Jemena, the largest gas distributor of gas in NSW has been successful in securing ARENA funding for a hydrogen project which involves designing and constructing a power-to-gas (P2G) facility to source renewable electricity and convert it into hydrogen via electrolysis.

In the short to medium term companies are looking at dispatchable energy sources such as hydro and battery to add resilience to Australia’s energy mix.

Large-scale renewables, including solar and wind, will likely continue as large retailers continue to off take.

Microgrids are also being utilised by Ausgrid as it seeks to utilise more solar in its local networks in a bid to lower demand on the grid and reduce the need for the company to replace ageing infrastructure.

At the end of the day, the market is driving the energy transition to capitalise on the opportunities the future of energy will reward those who move fast and together, and make a choice to lead in the space.