The Australian Energy Market Operator (AEMO) has released its 2022 Integrated System Plan (ISP), providing a 30-year roadmap for the acceleration of the transition to net-zero and investments in the National Electricity Market (NEM).

AEMO has involved more than 1,500 stakeholders – including policy makers, governments, consumers and energy industry representatives – to produce its third ISP, based on rigorous economic and engineering analysis.

“These transmission projects are forecast to deliver $28 billion in net market benefits, returning 2.2 times their cost of $12.7 billion, which represents just seven per cent of the total generation, storage and network investment in the NEM.”

The ODP identifies five projects as immediately actionable which should progress as urgently as possible:

While delivery dates are as advised by project proponents, earlier delivery would provide valuable insurance for any faster transition or additional benefits to consumers. 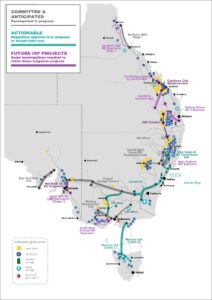 “The step change scenario forecasts annual electricity consumption from the grid will double by 2050, as transport, heating, cooking and industrial processes are electrified and 60 per cent of current coal generation exiting by 2030,” Mr Westerman said.

“To maintain a secure, reliable and affordable electricity supply for consumers through this transition to 2050, investment is required for a nine-fold increase in grid-scale wind and solar capacity, triple the firming capacity (dispatchable storage, hydro and gas-fired generation) and a near five-fold increase in distributed solar.”

Mr Westerman said that the need to cost-effectively deliver the investment in firmed renewables has gathered momentum in recent months.

“In addition, generation unavailability and high commodity prices further highlight the need to invest in the transmission plan outlined in the ISP to support firmed renewables.

“The ISP will help industry participants, investors, governments and communities plan for the decarbonisation of the power system to deliver low-cost, firmed renewable electricity with reliability and security.

“Importantly, the ISP will help meet state and national climate targets, and contribute to economic growth through low-cost, reliable energy.”

Commitment for the transition to renewables is essential

The Climate Council has welcomed the 2022 ISP, acknowledging that Australia’s transition to net-zero by 2050 is accelerating faster than expected, with the impacts of coal-closures brought forward and renewables becoming cheaper.

Climate Council Senior Researcher, Tim Baxter, said the adoption and transition of renewables will bring immense opportunity to Australians in terms of creating jobs, lowering emissions and ensuring security to our power supply.

“Renewables will be doing the major heavy lifting in getting us to net zero emissions, and it’s great to see this report supporting further ramping up of the rollout of wind and solar backed by storage, which is the cheapest form of new generation in the country.

“Off the back of an energy crisis where Australians are being forced to rely on ageing and unreliable coal plants and expensive gas, it’s critical we get the transition right and move away from fossil fuels to avoid the worst impacts of climate change.”

“The scenarios mapped out by AEMO also show that we can push for higher ambitions to transition even sooner than predicted.

“In a time of energy crisis and also seeing the consequences of a warming atmosphere, Australians want to see renewable power and storage to reduce energy prices, insulate against global energy price shocks and help avoid the worst effects of climate change.”

ENA Acting Chief Executive Officer, Tamatha Smith, said transmission development – making the electricity system more connected across the whole of the NEM – was critical to enable the most affordable transition to a net zero energy system.

“AEMO’s ISP confirms every dollar spent on transmission will return more than twice this in benefits to customers,” Ms Smith said.

“This investment will enable cheap, renewable electricity to flow from where it is generated to where it is needed, and more supply will help lower wholesale prices.

“AEMO has stressed urgent action is required on five key transmission projects and it is important that regulatory approaches support the investment needed for the timely development of this infrastructure.

“Unfortunately, aspects of the Australian Energy Regulator’s (AER) recently released draft Rate of Return Instrument will make this harder if they are approved.

“The AER has proposed a move from the normal financing practice of a ten-year bond rate for the assessment of returns on equity to a five-year rate. If this is implemented, it will reduce incentives for investment at a time when it has never been more important.’’

Ms Smith said that to enable a smooth transition to renewables, networks would install more than 10,000km of new transmission lines, continue to connect solar at world-leading rates, and make the change to renewable gas sources.

‘’The ISP details the scale of the challenge in front of us, with the most likely scenario forecasting a doubling of electricity consumption from the grid by 2050,” Ms Smith said.

“It is critical that regulatory settings create an environment that incentivises more investment to connect low-cost renewable energy sources.”

Marinus Link welcomed AEMO’s 2022 ISP, which confirms that Marinus Link should be delivered urgently to provide much-needed clean energy for the national grid.

“This report highlights that Marinus Link will unlock Tasmania’s incredible clean energy resources for the benefit of all Australians and play a critical role as we transition to cleaner energy at lowest cost,” Ms Clark said.

Critically, the ISP also recognises the benefit that Marinus Link will provide in providing increased security and reliability for the national grid.

“The construction of Marinus Link will enable the mainland to access Tasmania’s abundant renewable energy and deep storage, ensuring that we can help keep the lights on right across the country”

AEMO has also highlighted the role that the Federal Government’s Rewiring the Nation Policy can play in supporting the earliest delivery of Marinus Link and the other ISP projects.

“We very much look forward to supporting discussions between the State of Tasmania and the Federal Government in relation to the Rewiring the Nation Policy and the opportunities it presents for Marinus Link going forward,” Ms Clark said.

“Importantly, we’ll continue to advocate that the costs and benefits of Marinus must be shared equitably right across the NEM.”

Hydro Tasmania has welcomed the 2022 ISP confirming Marinus Link as “immediately actionable”,noting it should progress urgently.

“What we have seen happening in the market of late places even more urgency on progressing critical projects like Marinus Link,” Mr Brooksbank said.

“Tasmania has exactly what is needed – cost-effective clean energy backed by long-duration storage, and Marinus Link will unlock that.

“Battery of the Nation and Marinus Link will give Tasmanians access to the lowest possible power prices, lock in our energy security and create economic benefits through jobs and regional investment.

“It is great to see AEMO also confirm the importance of storage and the vast volumes required to keep electricity supply secure, reliable and affordable.”

Energy transition depends on planning ahead

The peak body for generators and retailers, the Australian Energy Council (AEC), said the ISP highlights the profound disruption occurring in the grid.

The AEC said the ISP outlines the measures needed to transition the NEM to lower emissions while keeping costs down for consumers and ensuring reliability.

The AEC’s Chief Executive, Sarah McNamara, said the rapid decline of coal in the market is front and centre in the ISP along with the need to ensure there are sufficient dispatchable and sustainable resources in place that can operate for extended periods as coal retirements occur.

“It’s critical we get the transition right to avoid unnecessary disruption and costs for end users,” Ms McNamara said.

“Transmission has an important role to play, but we need to plan the necessary new transmission carefully. AEMO’s use of an ‘optimal development plan’ for major transmission developments is prudent in this regard.

“It will remain critical that each development be subject to detailed cost-benefit analysis before committing customer funds.

“To provide investment confidence, consistency of approach is essential and we encourage all jurisdictions to get behind AEMO’s guidance to deliver for consumers rather than developing their own unique planning approaches.”